- Let's listen to the cableway first

- When I just came in from the foot of the mountain, the road went up along a stream

The water here hung from a stone slab

- While we were recording, a kid came to play. His father called him:

- Along the way, many people were curious about what we were holding. Most people said that we were recording Tiktok. A few people said that we were collecting sounds. There were two parents who told their children that they were recording, and whispered. Of course I don't want to disturb other people, but I still think it would be great if everyone was like them. On a scenetic platform, we recorded the breeze and the birdsong. Magpies have always been the overlord in the mountains

- Coincidentally, a bee flew onto the windshield

- The Pterorhinus davidi in gray-black was not to be outdone

- Of course, there were warblers

- After a steep staircase, visitors had to rest

- As the tourists went away, the common nuthatch in the distance blent with the breeze.

It was getting late, the afterglow was falling, most of the tourists were down the mountain, we stopped by a spring. The forest ranger urged us to left. We became the only people in the mountain. The spring on the left, the warblers on the right, which were in groups, ready to go home

- The cableway finally stopped, we were able to enjoy absolute tranquility. No people, no wind, only distant birdsong, and low-frequency echoing in the valley

- Arrived at the foot of the mountain, the sky has already been dark, and the stream would guide us

- When we returned to our residence at night, there was a strong wind of scale five. At an altitude of more than 800 meters, the temperature dropped to 5 degrees. The strong wind made the forest tremble, and then rolled up the fallen leaves, scratching the ground

- The next day, we went to Longmenjian Scenic Area. This is a long and deep canyon, with a stream running through it. The gust formed by canyon effect made it difficult to move around, let alone recording. Finally we found a gentle flat land, the stream gurgled down, the reed rustled

- "The Faint" is a field recording program, hoping to lead our listeners into a singular kingdom of sound. Recording, production, and dubbing with Ku Jihhoe. This program is released on Apple Podcast, NetEase, Himalaya, and Bilibili. For more information, please see our website TheFaint.cc. We welcome your valuable comments. background music: https://icons8.com, "GODDESS" 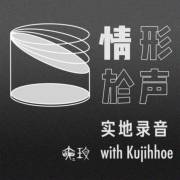 简介：大家好，我是柯棋瀚，我将在这里发布实地录音。更多见个人主页：kqh.me。 In daily life, the sound heard by the ear is often overlooked by us. Now, I will post my field recording here, trying to lead everyone re-understand listening, and feel the expressive power of the sound. Please wear headphones in a quiet place.